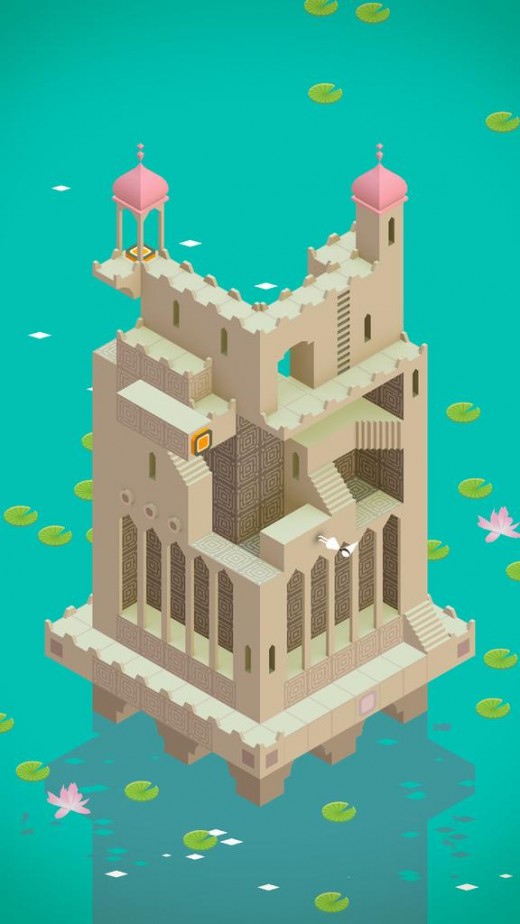 I think it isn’t surprising to me that I considered Monument Valley to be the best game of this year. It was well-crafted from a mechanics standpoint, with lush and well-chosen aesthetics. If there’s any one bit of nerdity that I admit to, it is that videogames that employ strong color palettes speak to me moreso than good gameplay. But what spoke to me more than all that was that Monument Valley was a game about hidden depths, about secret faces and alternate surfaces. The comfort came from allowing me to access these things with multiple attempts at twisting, pinching and slowly turning walls and cranks, shuffling Ida and the totem back and forth until it clicked into place.

Life is never so easy as this and Monument Valley gave me the small satisfaction of watching something fall into place, finally. 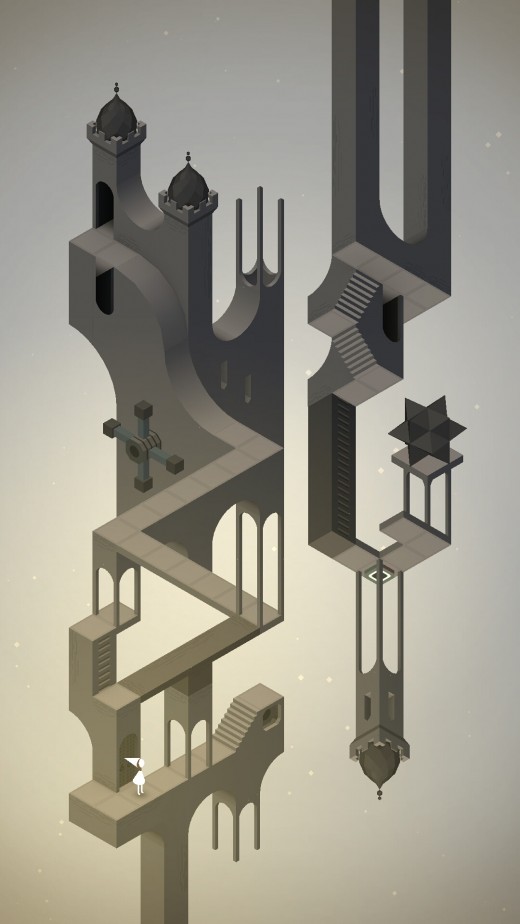 I think 2014 was the first time in a couple of years where things started to look up. After a disaster, you spend a certain amount of time assessing the damage, slowly taking stock of what you have and cobbling together a foundation for yourself that hopefully you can build upon. The easy stuff comes first, those base needs - safety, warmth, hunger. Little by little, you start erecting plans and developing a path for where you go next.

Last year was the easy stuff, this year was difficult.

And no one gives you a guidebook on how to push the wheel, how to start climbing. You just have to move the fucking rock. You have to show up and do the work.

You also have to want it. But what is it?

It didn’t help that after nine years of thoroughly participating in the monolith that was World of Warcraft and its community, two years of that blogging about gameplay and feminist critique, I decided to finally quit. I’ve drifted back into its orbit from time to time to see how things are but I achieved a kind of escape velocity; I moved away from the harm I was doing to myself being hyper-focused on one game in both my writing and my personal life. In the process, however, I slashed many of my ties with acquaintances, gave up a part of my life I had grown used to and landed square in the middle of unfamiliar territory. It’s true that MMORPGs have a kind of insulating effect that lets very few things in and out, and I wasn’t really prepared for the terrain of the larger gaming community. I’ve been playing catch up ever since. The upside is that if you have something to say, people will often listen. I have a bad habit of being envious of other people’s success, but there’s nothing stopping me from making my own creations, writing what I want and pushing for the kind of narratives I enjoy most. It helped that I still had my podcast, my blog, and the support of my closest friends. In that respect, this year has been better than ever. Our work on Justice Points has opened up conversations with people who’s work we admire and enjoy regularly as well as made us tons of new peers. It allowed us to explore the kind of themes in video games that we weren’t getting as much from Warcraft.

Getting to express myself on my blog was also enriching. In some ways I’m still new to this whole “gaming” thing, even if I don’t seem like it. I spent a lot of years not being aware of games, and then many more years fully focused on one to the exclusion of everything else. This year gave me an embarrassment of free time and content to consume, whether it was buying my first real console or trying out many games on Itchi.io or made from Twine. I’ve met so many people who are both like me and yet not and it’s been amazing. I feel connected to a much larger community of people who share some of the same goals and concerns as I do and who make some truly cool shit.

(A by no means exhaustive list of work I enjoyed thoroughly this year: The inexorable march of squalling baby birds, waiting for someone to regurgitate into their mouths. They say we are cuckoos, that we are here, disguised, to push them from nests. They retaliate, they shit everywhere, they derail in a flock that blots out the sun. Their noise deafens and yet says nothing.

They stood in our way, uncomfortable that the world is suddenly not about them.

It was upsetting and it was suddenly very confusing to come into a community that was full of much of the same behavior I had weathered just a year or so prior, especially when it gained a hard carapace, with hashtags and celebrities, message boards and intelligence missions. Women I had admired were packing up and leaving to do something more worthwhile, and I couldn’t blame them. The ones who stayed behind dealt with an endless torrent of roadblocks, harassment and fear.

The fact that we had to wrestle between being well-known and attacked versus invisible and unmolested still chills me. The overall trajectory of this year left a lot of people saying that this year was a hot mess, and it was. We still have a lot of work to do, myself included, to raise the tide for everyone, not the select few who are relatively unperturbed by the surf. The personal growth that I went through this year taught me so much about the power of doing my own thing, appreciating the work of others and doing what I can to put out more value than I take in.

I don’t believe that things begin and end depending on a calendar and far too often, I think we assign ourselves these waypoints to attempt to create meaning from largely disorganized circumstances. The bullshit from this year is going to creep into the next year if we are not vigilant. The work we started regardless of what month it was is going to continue on and doesn’t need to have happened because the clock ticked over. I put a lot of energy into beginning achieving things that I hope to see bear fruit this next year because waiting for the right time is a faulty idea. I have a hard time finishing things. This does include videogames.

When I finished Monument Valley and saw the logo draw itself out of the stars, I felt satisfied. There’s power in endings, really good ones, ones that stick with you. The power to cut things off at the right point in the story is something we chase very hard as human beings, which goes back to this belief in the end of the year. We want to package things in a way that makes sense, that our choices lead to a reasonable conclusion.

This is my attempt at that now, as unreasonable as it was.