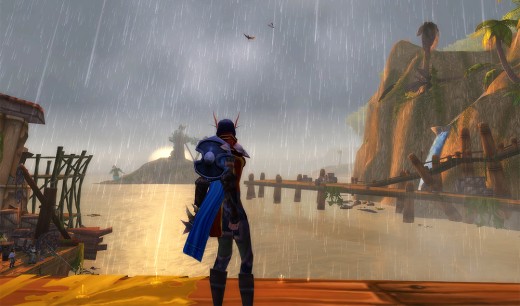 I’ve found that the best way to spruce up my World of Warcraft experience sometimes is to do something radically different, just as an experiment. Lately, I’ve been feeling the itch to roleplay again, despite the fact that I ran screaming from that particular community some years ago. Things Alliance-side on my RP server tend to be extremely insular and filled with the same people that I didn’t want to deal with. On the recommendation of my friend Mainfloortank, I decided to roll a fresh new toon on Wyrmrest Accord. Not only that, but Horde! There’s nothing like rolling on a faction you’re largely still new to and as a role you’re fairly unfamiliar with (tank) to get the old creative juices pumping. It’s been a pretty weird experience so far - Wyrmrest Accord is stuffed to the gills with roleplayers. I’m serious, they are everywhere. I’ve been so used to the RP only happening in a major city and only holding specific events, but you can go most places in the world on Wyrmrest Accord and find people tucked away chatting with eachother.

This has been mostly daunting to me, as one can expect. It’s one thing to wander around Silvermoon City with an RP flag, it’s another thing to actually roleplay. Coming new to a server, new to a faction, new to this race’s lore means you have to hit the ground running when it comes to developing a story for yourself. I made sure to note that I was returning to RP so people might go easy on me. I picked a fairly open character concept that allowed for some confusion regarding lore or world events. My warrior is a discharged Shattered Sun Offensive soldier that’s been wiling away the years in Quel’danas and only recently got shuffled back to the mainland. She’s missed a lot about what happened to the Horde, or even her fellow blood elves. She’s got a military lean to her sensibilities and her language, but for the most part, I’m still working out how she moves and acts. The weirdest part of it is just getting used to other people again.

Before our guild went completely social, we actually used to RP a lot. But a lot of us got out of it due to burn out with our particular server’s community of godmodding, creepy or just straight up annoying individuals. RP flags become less and less about finding good hooks and more just to lampoon people with bad writing or erroneous synonyms for eyes. (Because forbid you describe your eyeballs with the proper term. It’s not orbs, they are not hues!) So trying to completely get out of the Stadtler and Waldorf mindset when it comes to roleplayers and actually doing some roleplaying has been a bit of a challenge for me. Do I still screenshot really bad flags for my own private collection? Absolutely. Do I tell people who try to ERP with me or are otherwise gross in /say to tone it down? You betcha. (Because that shit is creepy, okay) Getting into character and not breaking constantly just because someone has bad punctuation or wants to tell me their life story immediately at the bar is tricky, but I’m really trying hard. Meeting a group of friends who absolutely take this a lot more seriously than I do has helped some with rolling with the punches and sticking to my blood elf’s story. It’s fairly essential to the experience that you at least take it a bit seriously, which in turn is why I think some role-players get so defensive of their craft, even when it’s not fair to other people. They spent a ton of time writing that terrible profile that makes them the children of Arthas and Illidan and by golly, they still walk around Silvermoon City with a smile on their face.

So you could say that playing a fictional character in a video game has given me some insights into how to properly interact with other real people better. Sometimes you’re not going to be surrounded by people who agree with you and you have to roll with it.

That being said, the particular intricacies of social interaction in WoW outside of my guild is still daunting to me. Being outside my little safe space of a guild has been a bit more of a shock than I was expecting. I met a pretty nice RP guild the first night I RPed and ICly/OOCly joined the guild immediately. Despite making some fast friends, I still had to contend with was, for all intents and purposes, a guild full of people who are not really as invested in minding what they say. Several casual misogynist jokes about hookers, prom queens floated by. I joined voice chat and had to contend with homophobic/ableist slurs. This is how the other half lives. It made me uncomfortable to the point where I talked to one of the officers and while they did enact a more stringent language policy at their latest guild meeting, I still had to leave. It felt so weird - are my values such a sticking point that I have to walk away from an RP guild that my vacation RP alt is sitting in? And with a lot of debate with myself, that answer is yes. It sucks but despite meeting people I genuinely liked and wanted to create stories with, I had to not be in a guild with the rest of the people there. But overall, it was more fair for me to leave than expect an entire guild to bend to my standards. I bucked up, talked with the officer who had recruited me and went looking for another guild. I’m in a new guild now and while they are not RP per se, they have language policies that a lot more in line with mine. It means that I can relax and not feel weird or awkward. It just makes me a tiny bit chagrined that I carry a concern so large like this that it informs all of my choices no matter where I go - it seems despite rolling an alt to “escape” and do something different means that I still miss how things are back “home” a lot.

This experience so far has been fun but seemingly like anything else I do and relate to this blog, it always seem to come with a lesson attached. I still have a long ways to go with learning how to be a bit more understanding of other’s time spent in-game, but definitely see why I don’t always mesh well with other WoW players. However, it is good to always take them as well as myself seriously. Both are worthy of respect, after all.