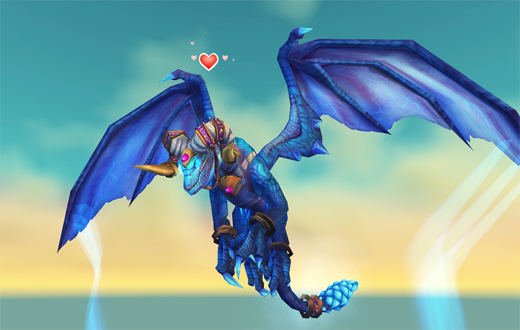 Despite the fact that the in-game holiday has been going on for well over a week now, today is the real Valentine’s Day! I know that this day, even in gaming, is fraught with emotions at both extremes: the sappiness of couples in love and the bitterness of those who feel the holiday’s sting of loneliness or commercialism. I find myself somewhere in the middle of these poles, even if I’ve been in a long-term relationship for 3 years. I always look for an opportunity though to share my feelings and admiration for those around me, even if it isn’t always romantic. Making someone’s day feel great is something we should strive to do every day but a holiday reserved for it motivates me to be as silly and gooshy as possible. Maybe you should do the same today, even in Warcraft.

Let a flag-carrier go to the base just this once.
Give a lowbie some gold and bags.
Be polite to someone in Trade Chat.
Help someone out in LFR.
Point out a neat spot to explore to a guild-mate.
Craft a piece of pretty mogging gear for a friend.
Write an appreciative note to your raid leader.

These are all little parcels of love that aren’t consumerist or necessarily romantic and are sometimes oft-needed in our harsh gaming landscape.

What am I going to be doing today myself? Oh, this and that. My partner and I don’t really celebrate holidays overly much and we already spent the morning playing the Mass Effect 3 demo together (okay, so they played and I watched and provided useful color commentary) and sharing chocolates that I bought at Walgreen’s. That’s about as awesome as I could hope for. I know that I’ll probably be doing a guild-run LFR tonight and maybe some last-minute charm grinding for another Swift Lovebird. I bought one for myself cheap out of Trade chat, and had one that I purchased with charms to sell after the holiday was over. However, a guild-mate who has her daughter in our guild really wanted to give one as a present, so I concocted a scheme where we take the one I had and send it from an alt named after the daughter’s favorite NPC as a Valentine’s Day present. Stuff like making a kid and a guild-mate happy is a little more important than gold, as far as I am concerned. To My Fans: Without you, there wouldn’t be a blog, it’d just be me prattling on and on. You give me enthusiasm, hope, laughter and motivation in piles. Interacting with an intelligent audience and being a voice to some of my fellow gaming nerds is what got me out of one of the hardest times in my life. I love all of you and you make me smile every time you comment or Tweet at me.

To My Guildmates: Not only has it been a pleasure being your officer and now guild master, but also your stupid friend. I don’t feel like we’re a guild so much as a family. I love all the stupid jokes we have, all the good times doing stupid things we do - LFRs, mount runs, exploring, talking on Mumble until late at night (11 PM). I love you even if you guys fill up the guild bank with gray items that I have to sell. do u even lift???1

To my RealID friends: Thank you for putting up in my insanity via status updates. Or responder spam from my boss mods. Or talking to me in general.

To my boyfriend: You don’t read my blog! I still love you anyways.

To Blizzard Employees: Thanks for making one of the best games I’ve ever played. Keep doin’ what you doin’.

To my haters: Y’alls my motivators. To the left.

Have a really amazing day guys. Hope you spend it with people you care about. But most of all, love yourself! It’s pretty groovy. Pilgrim’s Bounty is one of the most interesting holidays in-game; there’s no mount, no fun vanity items but as an Insane reputation grinder, I’ve always appreciated that reputation buff. However I’m not here to share my pointless farming with you, I’m here how to make you mages some gold. And want to know how?

Now  you’re thinking with portals! Little known secret, people will pay out the butt for portals during this holiday. Last two years I’ve made an easy 500G a day just from doing a couple things:

1.) Stand in one city near the cooking fire and accept whispers to portal someone to another city for tips or whatever your amount.

2.) Offer the “complete” package - an all-inclusive tour of all the cities, making all stops for people who need to go to all four for cooking dailies.

3.) /Yelling or /Saying your offer to portal people places.

Don’t let other mages undercut you. Just announce your service and watch the offers come in. Don’t accept this “but all portals should be free” nonsense. Relying on the goodness of your heart is for Christmas and people who don’t like swimming in their own bank vault of sweet, sweet portal gold. There’s a market here and it only comes around on holidays. People want a portal, and you’ll give it to them. What’s so bad about charging for it? It costs you money for the rune, no less. Why not put a little markup in there?

For those of you with mage alts, the required level to do this is 42, when you get all your city portals. Don’t worry about being low-level; people will thrust money in your face if your name is blue. And participation is as little or as much as you want to make it - do you want to spend 8 hours hanging around a cooking fire, /yelling your lungs out, portalling tons of people? Then you can do that. Do you want to just take people around as you do your own dailies? That’s cool too.