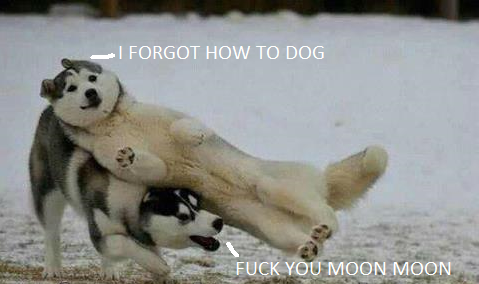 This is one of the least objectionable Moon Moon meme images.

The first Patch 5.4 notes and PTR came out this week and with it, all the fervor over our first real peek at the content that’s been talked up since Pandaria came out. People have been going gaga over set bonuses, new boss models, but what caught my eye was something way less exciting - a battle pet. Originally when I saw listed that there was a Moon Moon pet dragged out of the datamined content files, I thought it was just something stuck there that wouldn’t have anything meaningful around it.  Contrary to my belief,  Moon Moon is a pet dropping from a new Darkmoon Faire boss and will most definitely be in Patch 5.4. This has me pretty annoyed, if you could guess from the title of my blog post.

Moon Moon is a reference to this meme that got started on Tumblr. It is yet another meme that capitalizes on the mental differences of someone, with a host of veiled ableist insults and terminology. What is ableism? It’s specifically discriminatory actions and language towards someone’s physical or mental disabilities. Ableism usually and casually often occurs to making fun of people with learning disabilities or being on the autism spectrum (“spergin'” “retard/ed”), or for mental illness (“crazy”/”schizo”/”bipolar”/”hysterical”), and physical disabilities (“crip/cripple”, “spaz/spastic”, etc.) or using those terms against others as a negative.

Given that the person who started it all said that Moon Moon would be the “most retarded wolf”, it’s not surprising that everything else has followed suit. Memes, due to nerd culture in general, really like to constantly revolve around this sort of everyperson (or animal) that has speech impediments or some sort of mental “slowness.” It’s gotten so casual to the point that most people don’t realize that it IS insulting, but the reason these jokes proliferate is because denigrating people’s mental capacity has always been a trope for humor, because people consider themselves “better” than others for that reason. It’s hurtful, in short, but very few nerds really care.

Since Blizzard has a really inconsistent policy on including meme fodder in their game (Nom Nom Nom as a druid talent got scrapped, but we have this, plus look at how many Slapchop references there are), the fact that they felt it necessary to make a battle pet (as well as a raid boss, really) dedicated to a fairly recent,  insulting meme is frustrating to me. Meme culture is persistent but often long after it is actually funny, on top of the fact that a lot of them are generally offensive in some way. Did we need this? Not really. I’m sure this is considered by some to be a very petty gripe, but popular culture making its way into World of Warcraft doesn’t always mean it is good. My guildies dressed up as dinosaurs.

Despite the fact that there’s literally so many things to discuss about Patch 5.2, I feel like it’s a minute topic on a brain wandering idea that I want to focus on. I’ll get into my truly exciting discussion about waves and sea spray later, trust me.

My guildmates, particularly some of the people I play the game with the most, are mount and pet collectors. If there’s a pet out there, we have to have it, as soon as humanly possible. So when Patch 5.2 announced that there would be a giant island just for grinding out pets and mounts, needless to say we had to be there. See, the thing about the Isle of Giants is that it really is better go in a group. The dinosaurs (as well as the troll NPCs) all drop Giant Dinosaur bones, which is the currency used to purchase the Spectral Porcupette and the Bone-White Primal Raptor. The biggest dinosaurs on the island drop the most bones and are almost impossible to solo. So it seemed pretty common sense that we should group up with a proper tank and healer and grind out as many dinosaurs and Dinomancers as we could for a few hours to get possible pets and bones for everyone.

The way the bones work is that they are not shared; each cachet of bones from a mob is looted to one person from the tap group, round robin style. This means that to assure that everyone gets roughly the same amount of bones, you have to kill roughly the same amount of highest health mobs, and so on down the line. This is pretty easy to do if you have an organized group, so no problem there, right? Well while we were waiting for one of our party to get back from AFK, we noticed a curious conversation crop up in General chat. One of the server’s most recognizable farmers (who wasn’t a bot/cheating) was very strongly arguing about how the bones should be a shared loot to all parties involved in a kill. I found this really intriguing because it reminded me of something I had just said earlier when we were discussing the drop function: that Blizzard specifically designed these mobs to be most efficiently killed in a group that is concerned about the eventual fairness of everyone involved. This kind of mechanism hasn’t been seen since really Vanilla, where many tasks were unable to be attained without a huge raid group, much less solo. However, it is possible to solo some of the dinosaurs, but your bones per hour rate isn’t as efficient as a group of five who can tackle the biggest dinos. So it is possible to do this at your own pace. However, this farmer was really mad that all bones weren’t shared equally in a group. We pointed out that maybe his real motivation was less about a “fair share” so much as he wanted to be able to benefit from soloing and one-time grouping mechanics to take down a dinosaur but be fairly unconcerned with a group after that. It was seemingly mercenary to me.

This is how a lot of WoW mechanics work now, and I think that’s fine. I’m not saying that this is decaying WoW’s social space or people’s ability to be nice to eachother. For a lot of things, the potential to grief and content to be unseen was there with the old ways of doing things. The way that rare mobs have shared taps, world bosses have faction taps means a lot more people have a shot at getting something for their time. The fact that the dinosaur bones have two possible ways of proceeding - one is soloing and one is working with a group to ensure that everyone receives the same rewards is fascinating to me. It shows a mixture of both the old and the new. Maybe it was intentional, maybe it wasn’t. The fact that it’s got two settings due to the health and bone drops scaling on mob size is cool to me. I think in a lot of cases, a lot of people do not have a group to do this with (which I noted) and so working towards a group’s equal progress for each individual is either new or something they can’t do. But isn’t this maybe a good time to take initiative and work on one? It doesn’t take more than a forum post or a call in Trade/General to form a rough alliance to assure that everyone gets some bones and pets. But I can see where people’s trust in other random individuals have decayed over time, potentially.

I have hope though.

My group managed to get roughly the same amount of bones for everyone (other than the person who was AFK for an hour) and secured all four raptor pets for everyone in the group, including some extras for significant others. When we all have our shiny Spectral Porcupettes or Bone-White Primal Raptors, it will be nice to think back on all the laughing on Mumble and screams when we aggroed an extra Primal Devilsaur. I’m exceptionally lucky that I have that, and I wonder if that’s what Blizzard is trying to push for again: not only mechanics to give everyone to see the content, but to possibly see it together.

What do you guys think about this? Since Blizzard announced yesterday that their Remote app went completely free for all extra features (including mobile armory, and guild chat), it means that those of us who had been paying up until this point (me) got a free 7 days added to their account, as well as a thank you present of a Lil’ XT code. Since I already have a Lil’ XT, this means that I get to do my first-ever giveaway!

Lil’ XT is a valuable pet and steadfast companion. Not only does it do cute little mechanical idle animations, but it also has a very helpful mechanical wrecking feature. This means other mechanical pets as well as train sets, without needing to plunk down 200G for a Train Wrecker. And it is infinitely reusable. Talk about a bargain! Lil’ XT is also a Mechanical class pet, which means when pet battles come out, it has extra damage towards Beasts. It is a very strong choice for your first Pet Battle team since most of the first fights you encounter are against Beasts!

Just leave a comment below with what your favorite pet to battle with in 5.0.4 will be and I’ll pick a winner this weekend and announce it on Monday as part of my 5.0.4 post. Best of luck!

Far be it from me to never talk about what Blizzard has gleefully coerced me into spending money on, there is a new pet in the Blizzard store today. Much like Heart of the Aspects mount that it is based on, this adorable little golden whelp is precocious and sleek. It is wonderfully high-res and features a number of cute-as-heck animations such as a cyclone twirl (which makes it dizzy), a loop-de-loop (like the mount), fire breathing and a zippy dash that is reminiscent of the Celestial Dragon pet.

It retails for $10USD in the store and is for one World of Warcraft license, meaning it will be sent to all characters on that account.

I found myself snatching this up as soon as I read the tweets from Warcraft Pets as I hadn’t spent the money on the mount at the time. The price was right (as opposed to $25) and I consider myself suckered a lot easier into account-wide pets rather than mounts. Take a look at some of the screenshots I took on Misandry: I think it goes wonderfully with my transmogrification. Let me see screenshots if you’ve gotten this pet yet!