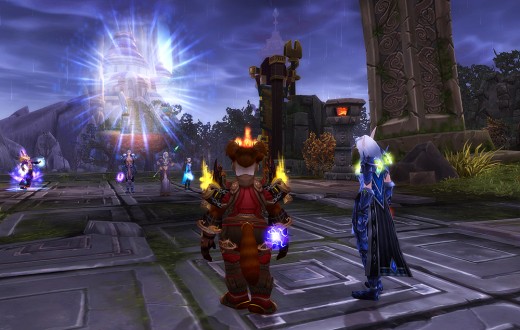 This week, like many other servers, my little RP server participated enough on the Isle of Thunder in order to unlock Stage 2. For anyone who hasn’t really poked at Patch 5.2 content, the newest daily hub features the forces of the Kirin Tor Offensive versus the Sunreaver Onslaught. These two factions are the continuation of the story from Patch 5.1 involving Jaina and the purging of Dalaran, and for the Alliance. What makes it so unique is that it’s one of the few places I’ve seen so far that is a largely woman-dominated part of the story, at least Alliance-side. What got me thinking about all this is the scenario (“Assault on Shaol’mara”) that players have to do that bridges Stage 1’s landfall on the island to securing the tiny outpost in Stage 2. The scenario, especially if you play a woman PC, is entirely driven and acted out by women NPCs - Jaina Proudmoore and Vereesa Windrunner in particular. There are also a couple other notable Kirin Tor Offensive names such as Archmage Modera and Narasi Snowdawn from the Silver Covenant.

It’s the first time that I can remember in-game that the story moving around me wasn’t really due to the actions of men or being plodded forward for their benefit. Even more astounding is that it isn’t really a diplomatic mission but it’s you fighting to push back the trolls in a skirmish. Vereesa is your guide Alliance-side and you and her fight with panache (she even says she likes your style!) and help gain ground so that the Offensive can set up a permanent base of operations on the island. It is a short scenario, to be sure, fighting a couple of bosses and trash but it felt a lot more immersive than some of the other story scenarios I ‘ve done, save for Operation: Shieldwall, but the fact that this particular group is headed up by Jaina and her lady pals is a welcome change from a world where she’s (and other women NPCs) have been shit on for taking the reins. While Garrosh and Varian are still duking it out like saggy diaper babies over Krasarang, Jaina and Vereesa are pushing with the Shado-Pan to unseat Lei Shen’s forces from the Throne of Thunder.

I always thought it was particularly weird that despite Azeroth being mixed gender, that women NPCs haven’t largely been as visible as “fighting” forces outside of Sylvanas. Even as leaders, they still assume more of a “calm” face to opposition. It wasn’t until Mists of Pandaria that it’s been more or less shaken up and not always in ways that I appreciate. Varian has always been presented as a hot-head but it isn’t until Jaina or Tyrande (in the Little Patience scenario) get their own need for anger that it’s suddenly not okay to be an aggressive person. I’m over-simplifying a bit but it seemed a little bit like women were still getting painted with a “damned if you do, damned if you don’t.” The Kirin Tor Offensive feels like a somewhat better outcome for the Jaina vs. Varian power dynamic than what Patch 5.1 had initially implied with Varian tsk’ing her into a corner because she had dared to go against his plans that she wasn’t even allowed to be a part of.  Jaina’s anger has always felt justified to me, especially as someone who read Tides of War, and I felt sad that most players, particularly Horde-side ones, wouldn’t necessarily grasp that her disgust with the Sunreavers would come from the fact that the ultimate betrayal of Theramore came from someone inside of Dalaran. The fact that the Offensive is also staffed and maintained by high-profile women that haven’t been seen in a while and would have largely been left to rot in Dalaran is a fresh take on the “daily hub with even more reputation grinding” dilemma.

For all of the problems that Mists has had so far with some of the PVE progression, the storytelling feels pretty top notch. I’ve long been a critic of some of Dave’s Kosak’s work in story development (I really hate his NPC!) but if this was his baby, particularly the scenario, then I can’t help but thank him. Women have too long taken a backseat in Blizzard’s stories and it is nice to see them doing something proactive and unguided by the desires of a male leader thus far. I’m really interested to see where the Kirin Tor Offensive goes as we unlock more stages, and I definitely feel more optimistic about then I have about some of the other things in this expansion.